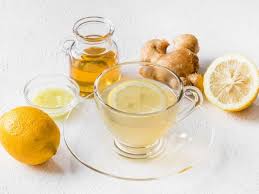 Ginger’s healing powers have been embraced by many cultures for centuries.

The medicinal root packs a powerful nutritional punch and is loaded with vitamins and minerals like potassium, manganese, copper, and magnesium.

But adding lemon to the mix brings it to a whole other level.

The health benefits of ginger lemon juice are as powerful as it sounds. From enhancing the state of the immune system to helping remediate the digestive tract and fighting cancer, ginger lemon juice is one drink you should be drinking regularly.

While you can consume these ingredients separately, the combination of the two makes it a powerful duo that enhances the state and function of all cells in the body.

Ginger and lemon work synergistically with one another to provide your body with some pretty miraculous benefits.

Researchers believe that because ginger and its metabolites collect in the digestive tract that this is why so many of its benefits are gut-focused .

Ginger is a digestive stimulant, meaning it gets the digestive juices flowing and improves how well your body digests food.

Studies have found that ginger triggers the production of trypsin and pancreatic lipase, two enzymes that help us digest protein and fat, respectively . It has also been found to increase gastric motility in healthy volunteers .

Another way ginger assists with our digestion is that it stimulates digestive juices like hydrochloric acid from the stomach and bile from the liver and gall bladder. This makes ginger a preferable supplement to have on hand when you’re about to consume a relatively large meal.

In terms of treating gastrointestinal disorders, ginger is useful for those who tend to get bloated or constipated. A study published in the Journal of the Medical Association of Thailand found that ginger can help relax the intestines during an irritable bowel syndrome (IBS) flare-up. Other studies have found similar, with ginger helping provide IBS relief in over 53.3% of participants.

Ginger is a great herb for helping bolster the immune system. This is in large part because of its high concentration of antioxidants and anti-inflammatories.

The bioactive molecules of ginger like gingerols help fight free radicals in the body, which play a role in heart disease, neurodegenerative diseases, cancer and aging. By consuming ginger, you help reduce your risk of these diseases by strengthening your immunity.

Lemons, on the other hand, are high in vitamin C, a natural antioxidant that enhances the immune system. They also have antiviral and antibacterial properties.

Ginger has been used by pregnant women for centuries in order to help alleviate nausea and vomiting — and science has proven its effectiveness in doing so.

Several double-blind, randomized, placebo-controlled clinical trials have shown that ginger consumption is effective and safe in helping prevent nausea and vomiting during pregnancy .

Ginger has even been reported as effective as dimenhydrinate in treating nausea and vomiting in pregnancy with fewer side effects.

Ginger has also been recommended to combat nausea associated with chemotherapy.

Lemons are also a popular treatment for morning sickness and nausea as they contain neutralizing acids that form bicarbonates — compounds that help relieve nausea.

This may come to a surprise, but ginger and lemon both help improve the function and state of the kidneys.

And if you’re someone who suffers from kidney stones, you’ll be pleased to find out that lemons actually help prevent them from forming in the first place. Lemons contain citrate, which helps prevent calcium from building up and forming stones in your kidneys.

One of my favorite health benefits of ginger lemon juice is by far its ability to reduce chronic inflammation in the body.

Ginger is a well-known anti-inflammatory. It contains anti-inflammatory compounds called gingerols, which inhibit the production of nitric oxide. Under normal conditions, nitric oxide would form damaging free radicals called peroxynitrites that inflame and damage our organs and cells.

Gingerol also acts on vanilloid receptors, which are located on our sensory nerve endings. Researchers have found that ginger’s initial burn affects the pain pathways directly, but also relives the inflammation, which in itself causes pain.

The antioxidants in lemons are also powerful anti-inflammatory agents that scavenge free radicals that would normally contribute to a heightened inflammatory response.

Several studies have investigated the anti-cancer potential of ginger and its role in fighting lung, prostate, ovarian, colon, breast, skin and pancreatic cancers.

This can be largely attributed to gingerols, the bioactive components found in high quantities in raw ginger.

Lemons and other citrus fruits have demonstrated potential in reducing cancer risk.

Some studies have found that people who eat the most citrus fruit have a lower risk of cancer. Researchers believe that certain plant compounds found in lemons like limonene and naringenin could have anti-cancer effects.

Ginger is often found in fat-burning supplements because of its metabolism-boosting effects. Research has found that eating ginger with other foods actually helps increase the thermic effect of those foods, therefore helping you burn more calories than you would without it.

A meta-analysis of studies investigating ginger’s weight-loss benefits found that ginger has a significant effect on body weight and belly fat (waist-to-hip ratio).

Many people don’t absorb all the nutrients from the foods they eat. In fact, the average person absorbs anywhere between 10-90 percent of the vitamins and minerals in their food. This is largely due to the number of processed foods people consume, and excessive mucus that lines the digestive tract.

Ginger helps promote regular digestion and metabolism of your food and is therefore a great addition to your diet if you’re having trouble absorbing nutrients. It does so by stimulating gastric and pancreatic enzyme secretion.

The vitamin C in lemon also improves iron absorption from plants, so if you combine ginger and lemon with some beets, then you’ll actually help your body absorb more iron from the beets!

Ginger and lemon are well known for their cellulite-reducing capabilities.

Both ginger and lemon help tone and cleanse out the lymphatic system, which is the main system in the body responsible for producing cellulite in the first place.

Because cellulite is a by-product of lymphatic system blockage, it is best treated by stimulating lymph flow.

Ginger and lemon are excellent toners of the lymphatic system. The acids in lemon and the warming properties of ginger help break down the accumulation of toxins in the fine lymphatic vessels, helping to improve lymph flow.

Ginger is useful for helping lower blood sugar, which is great for those who are diabetic, trying to lose weight or both.

A study on individuals with type 2 diabetes found that just two grams of ginger powder per day lowered blood glucose levels by twelve percent, and improved HbA1c (denotes long-term blood sugar levels), significantly. Over a period of twelve weeks, this led to a ten percent reduction in blood sugar levels. Quite impressive!

Lemon juice has also been shown to help diabetics control their symptoms, especially when taken at meal time. Researchers from the Université Paris-Saclay discovered that lemon juice slows the body’s digestive system, thereby delaying the conversion of carbohydrate into sugar.

Their findings suggest that lemon juice could help level spikes in blood sugar that often follow a large meal.

How to Make Ginger Lemon Juice

Making ginger lemon juice isn’t that difficult of a task. All you really need is some ginger and lemon, and a juicer (or a blender and fine-mesh strainer).

Some people may find ginger and lemon alone a bit too tart. If you’re not just making a ginger lemon shot, but instead would rather drink it in larger format (say 1-2 cups worth), then you may want to consider adding fruit to make it more palatable.