READ ALSO: A new study reveals that black women can get breast cancer from hair relaxers and dyes 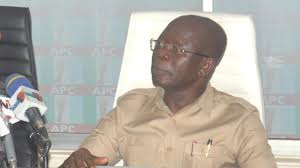 Former Edo State governor, Adams Oshiomhole, says he has no secret plans to make a sensational return as the national chairman of the All Progressives Congress (APC).

The 69-year-old was unceremoniously sacked as chairman last year after a two-year reign filled with controversies and public spats with party members.

His national working committee was then replaced by a caretaker committee chaired by Yobe State governor, Mai Mala Buni, who was charged with quickly repositioning the party with new elected leaders by the end of 2020.

However, that caretaker committee has come under fire for months for overstaying its welcome, with its legality also questioned by prominent members of the party.

In a statement released on Wednesday, August 11, 2021, Oshiomhole said reports that he’s planning to capitalise on the brewing crisis to make a return are false.

“It’s pertinent to set the records straight and put to rest this ridiculous falsehood,” he said.

The former governor has maintained a low profile since last year’s dismissal, and on Wednesday reaffirmed his loyalty to the APC under Buni’s leadership.