Want to teach you kids how to code? Several programming tools are available. Here’s our choice of the best coding apps for kids.

READ ALSO: The 7 Most Important Life Skills to Teach Your Kids 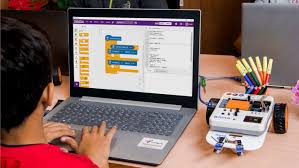 But just as old and young brains differ in retention, so too do learning methods. Kids coding apps offer many opportunities to teach children programming. It’s a fun, controlled environment.

Rather than send children to a coding boot camp, check out these best coding apps for kids to learn programming.

Kodable’s tagline reads “programming for kids, made with love.” Its easy lessons target kindergarten to fifth graders. While the K-3 curriculum is mostly foundational, fourth and fifth grade learning shifts to a focused set of topics.

Plus, progression through lessons remains fun. Games arrive as a set of challenges like navigating a maze. But Kodable doesn’t keep programming concepts too simple. Rather, Kodable even includes notions including looping and branching.

Why it’s great: Kodable can be accessed via the web or an iPhone app and introduces basic programming concepts

Fact: dinosaurs are awesome. Similarly, Daisy the Dinosaur is one of the best coding apps for kids, with mini-games to teach children programming basics.

For instance, a loop-deloop challenge encourages kids to use word commands to make Daisy perform various moves. But there’s a catch: you’re limited to using the spin command once. A hint suggests nesting the spin command inside the repeat five command.

Daisy the Dinosaur isn’t just one of the best coding apps for kids to learn programming because there’s a dinosaur. Although the dino protagonist certainly helps, it’s more the spectacular focus on coding and its challenges.

Why it’s great: Daisy the Dinosaur is free, simple, offers fundamental concepts dressed as puzzles, and appeals even

The Think and Learn Code-a-Pillar by Fisher-Price offers a unique bonus: an app and optional offline toy. It’s aimed at younger children, ages three to six.

While it’s an excellent idea to start kids off with hands-on tech and programming edification, too much screen time yields detrimental results. Therefore, the Think and Learn Code-a-Pillar app and its corresponding toy work in conjunction.

With the app (which doesn’t require the toy) kids solve puzzles—basic computer programming and coding concepts.

However, some of the directions might be slightly challenging for smaller kids, so it’s best if an adult supervises.

Why it’s great: There’s a corresponding physical toy in addition to the standalone app. Plus, music and effects can

be disabled for a distraction-free experience.

Tynker is a solid app, giving children the chance to “tinker” with and get hands on with programming for kids.

Like many apps for kids to learn programming, Tynker infuses coding with excitement. As a platform, it boasts a smattering of choices. Kids can code robots and drones, mod Minecraft, build apps and games, or explore STEM (Science, Technology, Engineering, Math).

A comprehensive environment with levels of increasing advancement makes Tynker one of the best mediums for kids to learn programming.

and grows as kids do.

The premise is simple yet effective. There’s a narrative about a tech fair and a mystery to solve. Along the way, kids drag and drop visual code blocks into their proper places. Certain mini games involve selecting costumes, and kids will find this a superb entry-level coding app for STEM development.

Because of its balanced gameplay, Nancy Drew is one of the best coding apps for kids to learn programming.

In all, 51 levels are available across four chapters, split as follows:

With simple interface, easy controls, and a choice of player character, Algorithm City teaches children procedural programming. Progression is smooth, with difficulty increased incrementally, although the game can be completed in 90 minutes of solid play.

Finally, what many consider to be the best coding app for kids: ScratchJr. This youth-oriented variant of the main Scratch development tool is widely used in schools and is popular with children. There’s a good chance your little ones have already used this tool.

As explained on the ScratchJr website, this app is aimed at children aged five to seven years. A simple user interface is based around a stage, programming area, and blocks palette, alongside editing tools.

The result of collaboration Tufts University’s DevTech Research Group, the Lifelong Kindergarten Group at the MIT Media Lab, and the Playful Invention Company, ScratchJr is accompanied by the Official ScratchJr Book and coding cards. You’ll find plenty of tutorials online, too.

The Best Coding Apps for Kids to Learn Programming

Although programming might sound incredibly advanced, it’s an excellent idea to get kids started early. These coding apps for kids provide a spectacular opportunity for kids to learn programming.

Reckon your children are getting a bit bored with programming apps? Now might be the time to change the mood and point them to some coding games for kids. If you need to keep them productively entertained, you could also try these electronics kits for kids.